Hypertension is the medical term for high blood pressure. This has long been recognised as a serious health concern in people but did you know that it is a common health problem in older cats?

To detect hypertension early, and because it is more common in older cats, we recommend regular blood pressure checks in cats from 7 years of age. Initially these may be done once or twice a year, but as the cat gets older these should be done a minimum of twice a year ideally.

The effects of high blood pressure can be quite severe and include blindness, brain problems and heart and kidney damage. 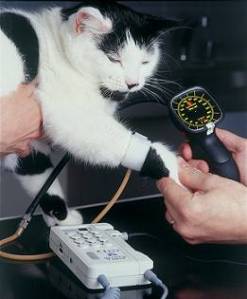 We can measure blood pressure in cats using either a limb or the tail!

International Cat Care has some good information on hypertension in cats.